a timeline of my experience

In the beginning of November, I posted my first announcement on Facebook of what I would be doing and what kind of donations I would need. Here is part of what I posted on Facebook:

Anything you can donate will be GREATLY APPRECIATED!!! I'm collecting through November 30th. You may drop donations off, mail them to our home, or I can pick the up if local. You may also reach my mom, April at 614-738-1365 if you have any questions.

Thank you in advance for your support and generosity,
Abi Leasure"

​After I posted on Facebook, I got an overwhelming amount of support from family, friends, and even strangers. People began to share the post to their pages so that even more people could see it. Within hours, people were dropping off donations to my house or messaging me saying that they wanted to help. Along with care and food donations, people were donating money so that I could go out and buy some items that we weren't getting enough of. I began keeping track of everything that was being donated so that I knew what we had enough of, and what we needed more of.

In addition to the post on Facebook, my competition cheer coach sent out an email to all the cheerleaders and their parents, letting everyone know about my project. Here is part of what she said:

"Hello Memorial & Bradley Cheerleaders!
In celebration of her 18th birthday - one of our senior leaders, Abi Leasure - is collecting donations for homeless individuals in our area and preparing bags to deliver! Let's work together as a team to help out one of our cheer sisters, and contribute to this excellent cause! "

She also set up a Sign Up Genius so that it was easier for everyone to donate. It was very helpful because I was able to go on and see who was signed up for what. Having my coaches help and support really meant a lot!

In addition to the Facebook announcement post, my mom and I created an Amazon Wish List so that people on Facebook would have an easier way of seeing what I was still in need of and could order it straight off of the list.

As the month went on, I began collecting more and more donations. I was driving to people's houses to pick up the items, people were sending them through them mail, or dropping them off to me.

During the first few weeks of December, things really started to pick up. I had collected a total of $175 dollars that I could go use to buy more items that we didn't have enough of, so I counted everything I already had, and made a list of items that we were lacking. Some of those items included: dog/cat food, gloves, paper towels, first-aid items, deodorant, lip balm, tissues, combs, fingernail clippers, razors, socks, etc. I went to the Dollar Store to purchase everything, so I was really able to buy a lot with the amount I had to spend.

It was then time to figure out how I was going to get over thirty shoe boxes that I could put the donations in to pass out. I called a few stores asking for help with donating any unused shoe boxes, but the store that was able to help was Target. They were so happy to hear about my project that they donated over thirty shoe boxes! My mom and I then went and picked them up the very same day. I am so incredibly thankful for Target and their willingness to help me with my project!

Randomly one day when I was thinking about my project and how I could make it better, I came up with an idea. Instead of just passing out the care/food packages in plain old shoe boxes, I thought it would be nice if I got some Christmas wrapping paper to wrap the shoe boxes in so that when I passed them out, it would be like they were getting a nice wrapped Christmas present! I also decided to put the food items in a Christmas gift bag so that it added to the Christmas feel! So later that day, my mom and I went back to the Dollar Store and purchased several rolls of wrapping paper and over thirty gift bags with my own money.

december - week leading up to the event:

It was now time to start assembling the care/food packages. My mom, dad, sister, grandma, uncle, boyfriend, and cousin were all at my house helping with this, because it was going to be a long and difficult process. We figured that the easiest and most organized way to go about everything was to make a sort of "assembly line" so that everything would run smoothly. Everyone was in charge of a few items, and we went in a circle adding those items to the shoe boxes. For example, my dad was in charge of adding hand warmers, tissues, and socks to the shoe box. He then passed the shoe box to my mom who added tooth brushes, toothpaste, and dental floss. She then passed the shoe box to my cousin who added deodorant, combs, and lip balm. We kept passing the shoe boxes in a circle until everyone added the items they were in charge of until we were out of shoe boxes to fill. This process took hours!

After all the shoe boxes were filled, it was then time to wrap them. We didn't really have an assembly line for this, we just each took a few boxes and spread out around the room to wrap them.

After the shoe boxes were all wrapped and finished, it was time to work on the food bags. Again, we did an assembly line process for this and it ran very smoothly. Some of the food items we had were packages of ramen noodles, cliff bars, nutrigrain bars, crackers, goldfish, and chips.

After a very long day, we were finally done assembling everything. We were able to make over THIRTY care/food packages, and my goal was to make eighteen, so we well exceeded that! We also had a few extra items that wouldn't fit in the shoe boxes so we put all of those in a rubbermaid container that we could just take with us incase people needed or requested some extra items. This all wouldn't have been possible if I didn't have all the help and support that I did from my family and community.

The day we've all been waiting for had finally arrived!

At noon, my uncle drove over so that we could load everything up in his truck and get heading out.

The first place we went to see if we could find any homeless individuals was the area behind Giant Eagle. I had never thought about checking there, but a family friend of ours also does work with the homeless community, and he recommended it. However, we couldn't find anyone. So we then started to head to Franklinton area, mainly Broad Street, where I have always gone in the past years of working with the homeless. There, we found a lot of people.

We first pulled into a McDonald's and opened up the bed of my uncles truck where all the care/food packages were. Right away, I saw a homeless individual and with my dad, we walked up to him with one of the wrapped shoe boxes and food bags and told him about my project. I could tell instantly that he was a little caught off guard by everything that we were saying and what we were giving him, but he accepted our gifts and thanked us immensely. As soon as my dad and I walked back to the truck, he immediately unwrapped the shoe box and dug through it, putting on the pair of gloves and hat that was inside. My heart was SO full of joy.

Slowly, more and more homeless individuals started walking up to the truck and we were passing out the shoe boxes and food bags left and right. It was so incredible seeing their faces light up with joy when they realized what we were doing. Many of them actually talked with us for awhile, telling us their stories of how they ended up there, or simply just expressing how thankful they were for what we were doing. Many of them said that this was the first time in a years that they were actually given a Christmas present that they could open.

After spending about an hour at that location, we had passed out so many shoe boxes and food bags that we only had about ten of each left, so we decided to go somewhere else. As we drove to our next location, we made a few stops along the way to pass out some shoe boxes and food bags to homeless individuals who we happened to see. When we got to our next spot, we only had about five of each left. Again, more and more homeless individuals came up to us and we passed out the remaining shoe boxes and food bags. After that, we started handing out the extra items that we had in the rubbermaid containers (the leftover items that couldn't fit in any shoe boxes). But those went quickly as well.

At this point, we were completely out of everything. I know that I had well exceeded my goal of eighteen care/food packages, but I really wished that I had more to pass out because I know there were tons of others out there who could use some help. But all in all, I am so happy and blessed that I was able to help over THIRTY individuals!

This was an experience that will never be forgotten.

my experience through pictures 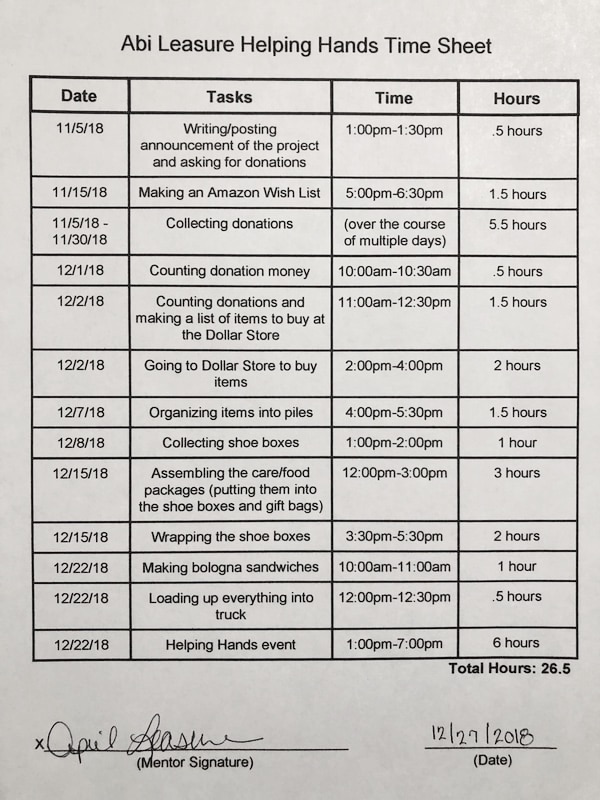